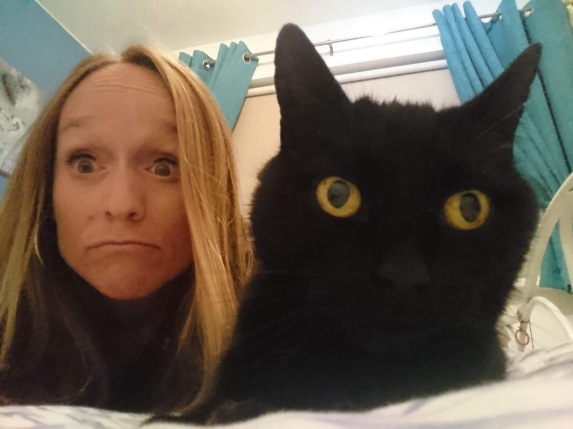 It irritates me so much when my mind will not let my body sleep. Tonight, this is certainly my reality. My cat, Max, is so attuned to me. He knows when the crazy cat lady is struggling to sleep. He’ll position himself beside me, on the bed, purring loudly, in a bid to send his Mum off to sleep. No such luck tonight. Here we are, Maximus and I, he’s curled up on the sofa, and I’m blogging (whilst eating bloody biscuits!). I love my Mighty Moo, I worship the ground his four, black paws walk on.

I had been dreading yesterday for a week. Dad had to see a private GP, and it just so happened that the GP worked in Bradninch. My Dad has not visited the town, since he retired form his Headship, 33 years ago. This was the one day I actually wanted his muddled brain to remain muddled. As we approached Cullompton, he was talking about the area. He was making good sense. Whilst on a normal day, this would make my heart happy, yesterday it made my heart heavy. As we drove towards Cullompton, I started to explain to him that we were going a little further on and up the hill. Immediately he said “Bradninch?,” My heart sank. As I confirmed it, I could feel his uneasiness.

Years ago, my Dad was Deputy Head at Haywood’s School, in Crediton. He loved his role there, but he was urged by the lovely Head to go for his own Headship. He got the first job he applied for, as Head of Bradninch Primary. He loved the job and the children there. He taught people I’m still great friends with today… My faithful Julie, who is actually more of a sister to me, and “Aunty Ju” to my two kids. Sarah, who is actually Superwoman. She’s had so much illness thrown at her, but has bounced back each time. Her Mum taught me and she was an amazing woman, just like her incredible daughter xxx

My Dad’s life was not made easy at the school, because the previous Head could not let go of his school. He’d had to retire, due to his age, but he was constantly making life impossible for Dad. Whilst all this was going on, my sister had been hospitalised and my Dad’s Mum (Grandma R) had dementia. Life was pretty testing for Dad. It was all too much, and he sadly had to take early retirement, after 28 years of teaching. He had a breakdown and had to end his Headship at Bradninch. As an 11 year old child, it was so sad seeing my Dad give up a career he was literally made for. Years on, when he began to do private tutoring, I was so proud to see him teaching again. He gave up the tuition this May. Two months before his horrendous stroke. I’m so grateful he decided to retire from tutoring, rather than the stroke forcing him to give it up. At 77, I think it was about time he retired, bless him! So proud of my Dad.

When I was 11, my Mum was nothing short of impressive. My sister was unwell, my Grandma R was suffering from dementia and Dad had his breakdown. My Mum never broke once, at least never in front of me. I’m sure she did, but never for my eyes to see. I remember I had a trip to London for the week, with my Primary school. As we met the coach, in the Bull Ring, Cullompton, I did not want to get on. My sister was ill, my Dad was ill and I did not want to leave my Mum alone with it all for the week. My Mum insisted I go, thinking it would do me good. I remember that week so vividly, I bloody hated it! I wanted to be at home with my Mum. It’s times like this, you have to grow up fast.

My Mum has been such an amazing Mum. When I was pregnant with Hats, she was so excited at the thought of being a Grandma. At 21, I wanted my Mum to be there at the birth, with my hubby. Luckily Bugsy allowed this! It was the most amazing feeling having my Mum and hubby both there. I would have hated her missing that. My Dad arrived just after Hats was born, and sat patiently outside the room… Until the Midwife told him that he could go in and meet his Granddaughter. My legs were still in stirrups!… Nothing like an open family! When Lou came along, Mum had to stay at home with Dad, to look after Hats.

It’s almost three years since our family started to see that things weren’t right with Mum. It is so hard to see the person you love, and hero worship, change. At first, it’s subtle changes that make you doubt yourself. Is Mum just having an off day? Is she just tired? You question everything. Until such time where the changes are more significant and your gut tells you things just aren’t right. It’s those days that pull the rug from under you. Two years ago, on that dog walk I’d had with my Dad, I fully respected his wishes to leave it a little longer before seeing the GP. Only now, do I feel this delay really wasn’t helpful. I’m now awaiting assessment to be carried out on both my parents. All the while, I’m signed off from work, not knowing what my future looks like. Holding out for these assessments. Considering whether or not I’m strong enough to leave my parents to it, and resume my position at work. Considering the possibility of being their Primary Carer. Knowing, financially, I can’t afford to take this option. Financially is one thing, emotionally is another story. I’ve been Primary Carer for fourteen weeks, I know how it goes. The plates I feel I’m spinning right now are moving in all different directions.

Returning to Mum. On Tuesday, in Taunton, I felt really frustrated with Mum’s dementia. Not Mum, but the condition. I love my Mum so much, I don’t love her dementia. You really do have to see the person and the dementia as separate entities. I think, if you don’t compartmentalise, it will have lasting and detrimental effects on a relationship, which is built on years of mutual love and respect. During moments of frustration (of which there are many), I look at my Mum and know that I love her, but the disease that’s affecting her brain is not always pleasant.

During the last few weeks, I’ve been so proud of my Mum. The impact of Dad’s stroke, and subsequent condition, must be immense and very scary for her. I’m repeatedly explaining to her what happens to someone’s brain when they have a stroke. At the time, she seems to understand, then I find myself being asked the same question a few days later. Repetition, reassurance and reminding all being key. Day to day, she’s functioning, more so than Dad.

As we were driving through Awliscombe, en route to Cullompton yesterday, my Dad was sat in the back of the Ferocious Viva. He leaned forward and touched Mum’s arm, and said “I still love you, Mary, despite all this.” I took “despite all this” to be their equally muddled brains. My Dad has always been a big softie and very open with words of affirmation, as has my Mum. They’ve always told me they love me. I spend my days telling people I love them…… Within reason! I have to mean it to say it! During the last three years, Mum has become a lot less affectionate. So, it made my heart happy, yesterday, to hear her reply “I love you too, Derek.” …That, and my Mighty Maximus licking my eyelids yesterday evening, were the highlights of my day.

Our cousin, Bonnie, just continues to be bloody incredible. This next round of chemo is making her really weak. She put a picture on Facebook yesterday to show the devastation, and impact of the cancer on her frail body. Her body may be exhausted beyond measure. But her spirit is absolutely awe-inspiring. She’s determined and she’s mighty. I’m so proud of this woman and her family. Her husband Dale, her Mum and her two young children are the most amazing team, battling against this cruel disease attacking her body. I know she’ll change her name from Vickery to Victory one day, and when that day comes, we’ll all be dancing. (And Bugs, the kids and I will be over in Canada for one hell of a party). Xxxxxx

(The pics of Max and I were not taken now, at 4am! Right now, I’m covered in biscuits, whilst the Maximus sleeps… I’m single-handedly keeping McVitie’s in business).

View all posts by catlady19744